How To Rule the World 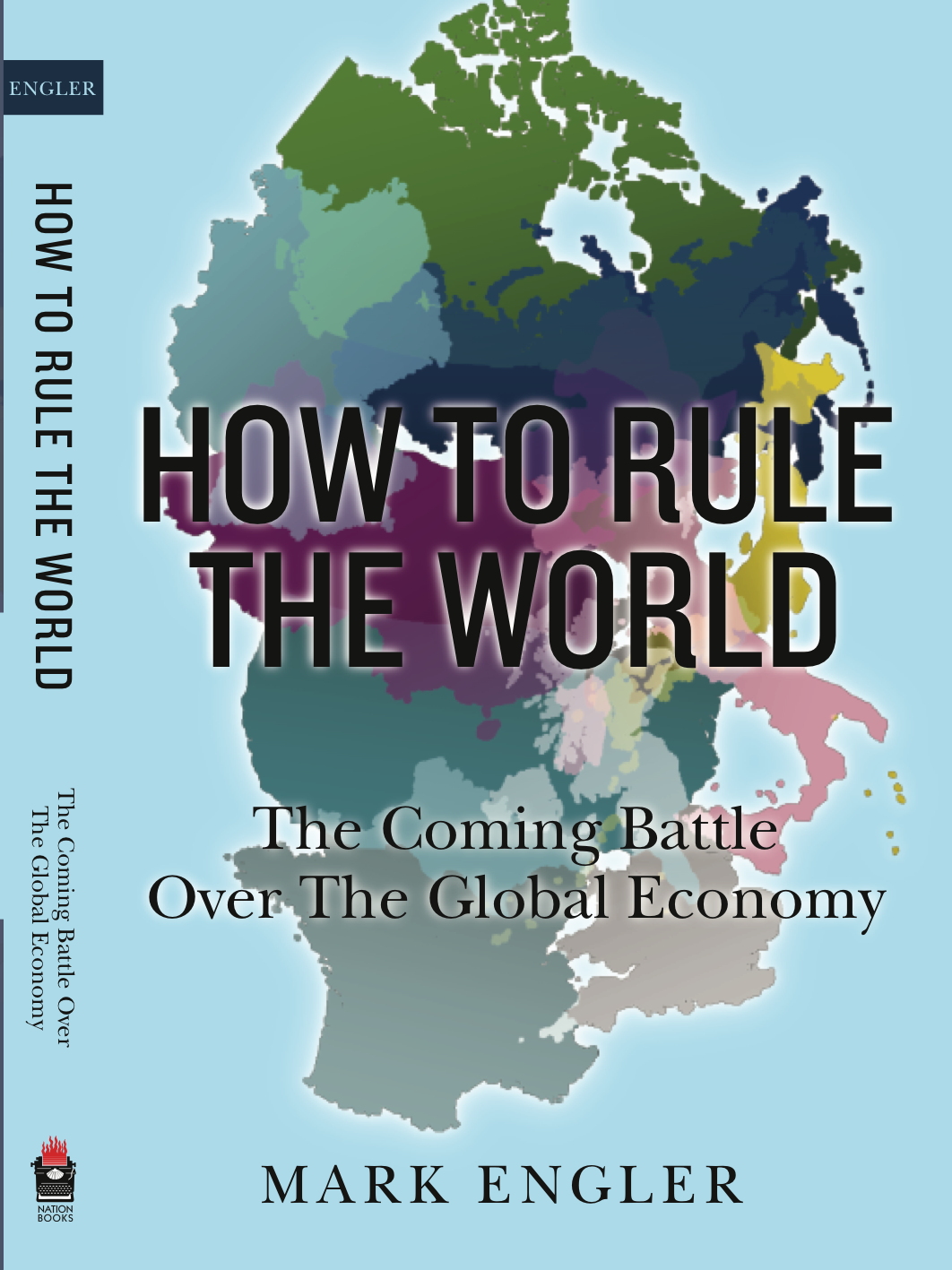 Mark’s first book, How to Rule the World: The Coming Battle Over the Global Economy was published by Nation Books in 2008.

From this page, you can:
— Buy the Book.
— Read a Book Description.
— Find Reviews.
— Learn about relevant Discussion Topics.
— Get info about the Book Tour.

“Impressively researched and sharply argued, How to Rule the World is an essential handbook not for the few who do rule the world but for the many who should.”
—Greg Grandin, Author of Empire’s Workshop

“How to Rule the World was written before the crash, but Mark Engler’s analysis holds up to today’s events. The financial collapse is part of a long-term waning of U.S. world power, and anyhow, the author predicted it. Engler’s critical insight is that the two dominant approaches to U.S. foreign policy are in trouble…. [He] shows that both neoliberalism and neoconservatism are in disarray. This opens possibilities for new international relationships based on democratic values and aimed at increasing equity and sustainability. The possibility is there, but it will take a movement – a ramped-up global justice movement, for example – to assure that the next U.S. president doesn’t try to re-establish an old, failed pattern – or create still more chaos in the attempt.”
—Sarah Van Gelder, YES! Magazine

Right now a debate is taking place over what values should define our international order. For global elites, it is a debate about how to rule the world. Laying out a new and original framework for understanding globalization politics in the Obama years, Mark Engler describes the evolving conflict over America’s role in the world. Past visions include the Clinton-era model of an expanding, corporate-controlled global economy and a Bush-era “imperial globalization” based on U.S. military dominance. How to Rule the World explains how these visions overlap and also how, at critical moments, they clashed with one another. It is written, however, in the hopes that neither will prevail. Even as Wall Street CEOs and Washington militarists argue among themselves, citizens’ uprisings in the United States, in an increasingly progressive Latin America, and beyond are bringing to life a vibrant “democratic globalization” based on economic justice, human rights, and self-determination.

Engler, a journalist, activist, and policy expert, details the conditions at the root of the current global economic crisis and explains how the globalization debate has profoundly shifted since the days of the Seattle protests: Countries are rebelling against deregulated market fundamentalism. The roles of international institutions like the WTO, IMF, and World Bank are dramatically changing. U.S. unilateralism and the disastrous war in Iraq deepened international divisions. As a result, the stage is now set for a critical new debate about the global economy.

Mark Engler is a freelance journalist and a senior analyst with Foreign Policy In Focus. Mark’s full bio is available here.

Selected by the Drum Major Institute as one of the “most interesting and informative progressive books” of 2008.

“Fasten your seatbelt. You’re in for a ride that will change your understanding of where we’ve been, what’s really going on now, and what’s coming next. Mark Engler explores, for the first time, the emerging battle between ‘corporate globalization’ and ‘imperial globalization’⁠—and the alternative, ‘democratic globalization, or globalization from below.’ If you want to know ‘what ever happened to the anti-globalization movement,’ why it is likely to roar back as a powerful force in world politics, and why it may make another world possible, don’t miss this unique and indispensable guide.”
—JEREMY BRECHER, author of Strike!, Global Village or Global Pillage, and Globalization from Below

“Full of passion, hope, and insight, How to Rule the World assures us that the future of globalization is not a foregone conclusion. Rejecting both the imperial behemoth and the leviathan of corporate rule, Mark Engler weaves disparate movements and burgeoning efforts in far flung corners of the globe together to show the strong, tensile strands of a democratic alternative⁠—a globalization from below that has the power to shape the post-Bush era.”
—FRIDA BERRIGAN, New America Foundation, Arms and Security Initiative

“This is one of the most hopeful and challenging progressive books to be written in a long time. Global elites, it turns out, are no more cohesive than, say, the crime families of New York, and perhaps a good deal less so. As the fault lines among those who have ruled the world for the past few decades become ever more clear, the time is upon us to finally follow up on Seattle and to bring democracy home. Never was a book more timely.”
—Andy Bichlbaum, activist, THE YES MEN

“As the world readies to heave a collective sigh of relief upon George W. Bush’s exit from the White House, How to Rule the World is a caution against complacency. Mark Engler offers a timely reminder that before Bush’s boots and bombs there was Clinton’s corporate ‘consensus’⁠—more soothing perhaps but no more sustainable than the neocons’ disastrous militarism. He then makes a case that there lies a third choice: democracy. Impressively researched and sharply argued, How to Rule the World is an essential handbook not for the few who do rule the world but for the many who should.”
—GREG GRANDIN, author of Empire’s Workshop

“Well-considered, revisionist analysis of the fierce debate about the future of our world economy…. Painting a vivid picture of free-market globalism’s dismal impact on developing nations, Engler advocates a populist ‘democratic globalism’ to replace the two current versions…. Engler’s plan may or may not stand much of a chance against world business leaders who retain an unshakeable belief in pure free-market capitalism, but his arguments will win many readers’ sympathy.”
—KIRKUS REVIEWS (*Starred Review)

“How to Rule the World was written before the crash, but Mark Engler’s analysis holds up to today’s events. The financial collapse is part of a long-term waning of U.S. world power, and anyhow, the author predicted it. Engler’s critical insight is that the two dominant approaches to U.S. foreign policy are in trouble…. [He] shows that both neoliberalism and neoconservatism are in disarray. This opens possibilities for new international relationships based on democratic values and aimed at increasing equity and sustainability. The possibility is there, but it will take a movement – a ramped-up global justice movement, for example – to assure that the next U.S. president doesn’t try to re-establish an old, failed pattern – or create still more chaos in the attempt.”
—SARAH VAN GELDER, YES! Magazine

“Can’t recommend it highly enough…. This is required reading for anyone grappling with what mass-based collective action will look like in a post-Bush era.”
—Public Citizen, EYES ON TRADE

“This book is both terrific and important — crisply written, sophisticated but accessible, and extremely valuable for progressives in the United States who want to reanimate the global justice movement here…. Written with the precision of a scholar, the flair of a journalist, and the heart of an activist, this book is vital reading for so many communities: academics, policy makers, activists, and anyone who wants an up-to-date account of the state of the global economy. I can’t recommend it more strongly.”
—JEREMY VARON, author, Bringing the War Home: The Weather Underground, The Red Army Faction, and Revolutionary Violence in the Sixties and Seventies

“Couldn’t be more relevant to our looming moment of transition.”
—TOM ENGELHARDT, TomDispatch.com

“This book is the clearest and most interesting analysis of the present economic order I have seen. It does not assume that readers bring special knowledge of international affairs or economic theory, and informed laypersons can easily understand it. Yet, the analysis is sophisticated enough that even the well-informed will look at these issues in fresh ways.”
—Barry Stoner, WITNESS FOR PEACE

“While Engler acknowledges the demand for progressives to spell out their alternative visions, he’s also willing to make the case for just saying ‘no.’ After all, ‘the alternative to invading Iraq is not invading Iraq. The alternative to CAFTA is no CAFTA.’ At base, arguments about globalization are about rules. Neoliberalism imposes a “golden straitjacket” (that is, allegedly pro-growth ends delivered via undemocratic means such as IMF conditionality)…. Freed from this odious restraint, countries can function freely and outside the sanitarium.”
—Todd Tucker, DISSENT

“Talk about eye opening…. [J]ournalist and foreign policy analyst Mark Engler dissects two distinct visions of globalization that have characterized the last two American presidential administrations and examines what likely is to come next…. Engler [backs] up his statements with facts and references galore. I’m always fascinated by out-of-the-box ideas that could lead to the truth, and if you’re the same way then this book is for you. Sure the economy is screwed up, everyone knows that. But after reading this book, I got a better idea of what was going wrong and what needed to be changed.”
—DES MOINES CITYVIEW

“Mark Engler’s new title…offers insight about the different currents at play in globalization, along with some new analysis about the rise of a distinct globalization that promotes social and economic democracy. This new movement is people-powered, and its future is promising…. The book is sure to raise some critical issues and pose meaningful alternatives to globalization as it has developed thus far.”
—ABBAS JAFFER, Foreign Policy In Focus

Topics of discussion relevant to How to Rule the World include:

–How Barack Obama’s vision of globalization differed from that of previous presidents, and what is likely to happen under the current administration.

–Where all the global justice protests went, and why they can come back.

–Why “free market” neoliberalism, which has dominated world affairs for two decades, is now in crisis, and how this creates vital opportunities for building a better global order.

–Why issues of trade and development are creating a battle for the soul of the Democratic Party.

–Why some right-wing critics, along with progressive protesters, turned against the World Bank, International Monetary Fund, and World Trade Organization.

–How progressive uprisings throughout Latin America are creating an exciting globalization from below.

–What alternatives are available to counter the type of “free trade” future promoted by Thomas Friedman.

–What connections exist between war and globalization, and how the invasion of Iraq represented a break from earlier models of corporate expansion.

–What impact the anti-war and global justice protests of the past decades have made.

In 2008, Mark Engler completed a 21-city book tour for How to Rule the World: The Coming Battle Over the Global Economy. Mark continues to speak in college classes and at conferences, retreats, teach-ins, and other public events about domestic and international politics. If you would like to schedule a lecture, reading, interview, or discussion with Mark in your city, please contact us by e-mail.