A Guide to Co-Governance: Can Movements and Politicians Work Together?

Report published July 11, 2022 by the Ayni Institute, Waging Nonviolence, and In These Times.

In recent years, “co-governance” has been invoked with increasing regularity in social movements in the United States, but it is often not well defined or examined in depth. As a result, many people may wonder: What is co-governance? And why is it relevant to progressive politics?

As an answer to these questions, we are pleased to announce the release of a new report: A Guide to Co-Governance: Can Movements and Politicians Work Together?

The full report is available in PDF format here, and its contents are also accessible via the links below. 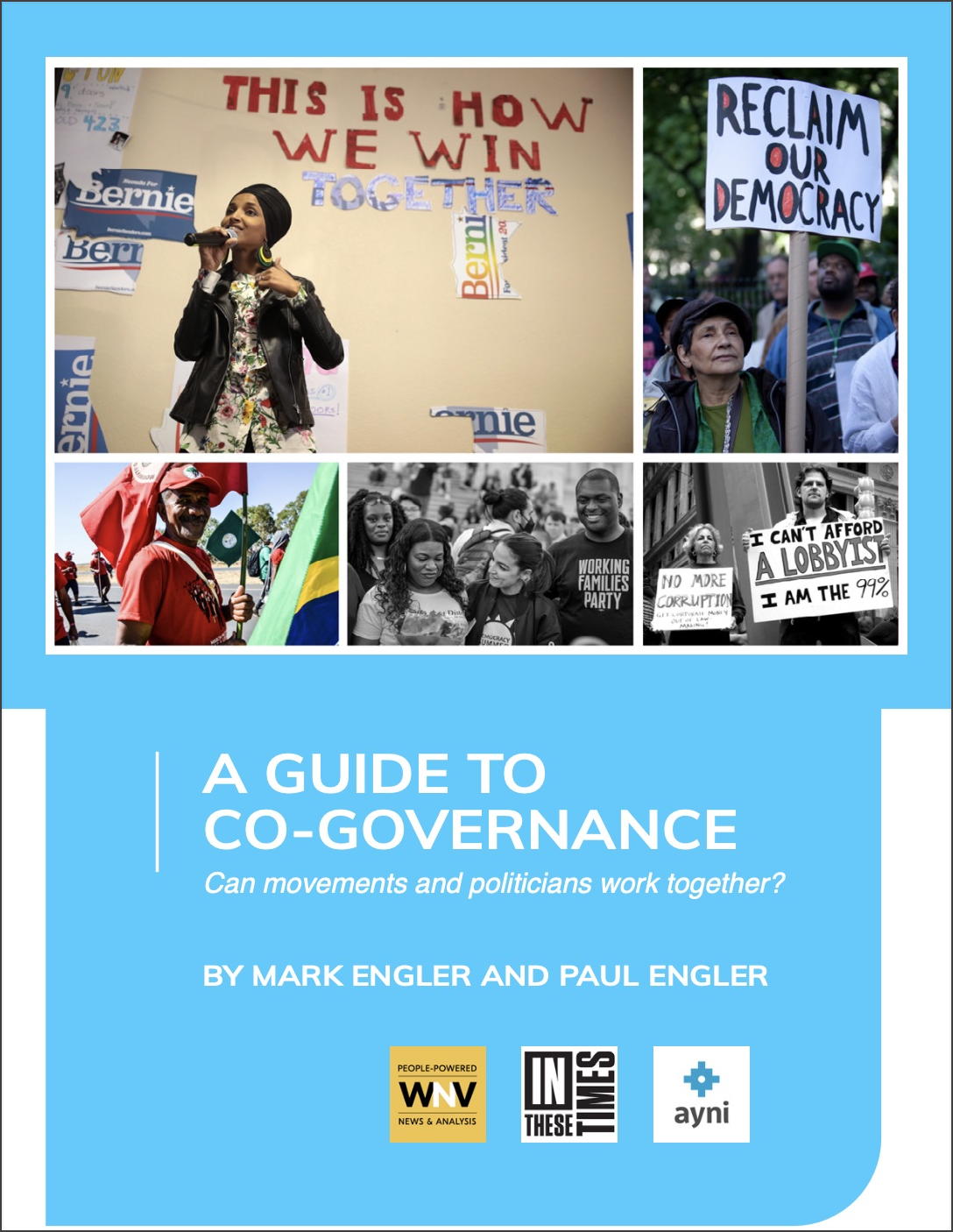 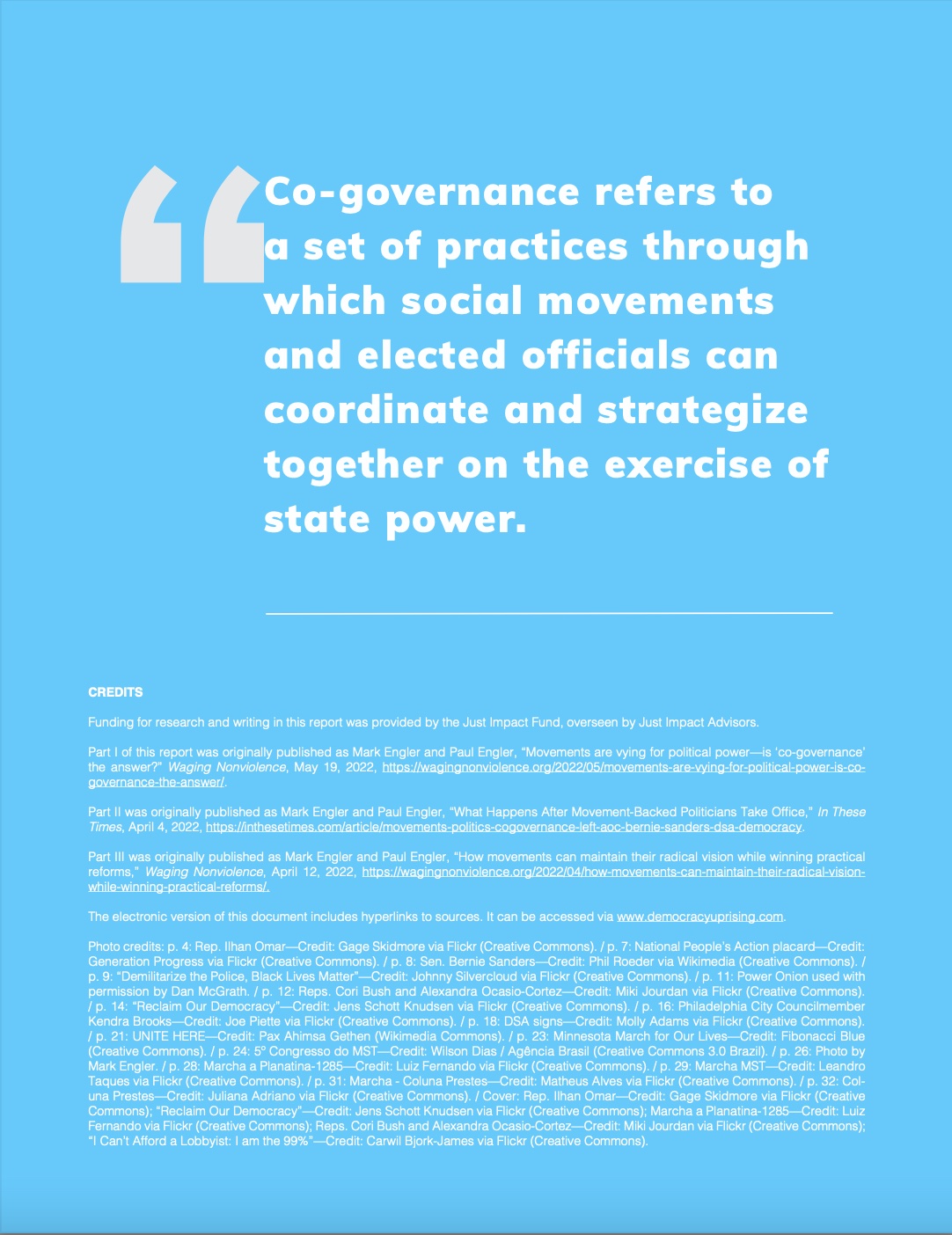 This report began as a series of articles published in early 2022 on the theory and practice of co-governance. In preparing these articles, we undertook a review of existing literature on co-governance and conducted a variety of interviews—both formal and informal—with organizers, scholars, and other social movement participants. Given the feedback we received on these pieces, as well as the desire expressed by several organizers to use this material for training and group discussion, we decided to compile our published articles into a single report, which could be more easily accessed and distributed. The Ayni Institute, Waging Nonviolence, and In These Times have joined in partnership to release and distribute this document.

Part I of this report, “The Rise of Co-Governance,” provides a history of the term and examines why co-governance has emerged as a topic of social movement discussion in the current political moment.

Part II, “Five Practices and Five Pitfalls of Co-Governance,” looks at what happens after movement-backed politicians win election. It considers ways in which movements and politicians can effectively work together, while also highlighting common tensions that arise between grassroots activists and the elected officials they put into office.

Part III consists of a discussion with professor Rebecca Tarlau about “contentious co-governance” in Brazil. In particular, it examines how Brazil’s landless workers movement, or MST, seeks to win practical reforms within state institutions while avoiding co-optation. With Tarlau, we believe that the MST’s example is valuable in illustrating how co-governance can be explored outside of a purely electoral context.

The three parts of the report can be read together or separated for use as individual handouts. Each part is designed to be able to stand on its own. At the same time, the articles complement one another and collectively offer a more comprehensive treatment of the origins and use of co-governance. While Part I contains the most historical background, Part II has the most nuts-and-bolts content for those attempting to put this idea into practice. The third part expands the discussion by providing an international case study and proposing broader ways of thinking about social movements co-governing within the state.

Together, we hope that these materials will provide a means of better understanding the promise and the potential limitations of co-governance—both as a theoretical concept and an emerging set of practices—and that it will assist movements in forming better strategy.

The full report is available in PDF format here.

Part I of this report was originally published as Mark Engler and Paul Engler, “Movements are vying for political power—is ‘co-governance’ the answer?” Waging Nonviolence, May 19, 2022. The original article can be read online here.

Part II was originally published as Mark Engler and Paul Engler, “What Happens After Movement-Backed Politicians Take Office,” In These Times, April 4, 2022. The original article can be read online here.

Part III was originally published as Mark Engler and Paul Engler, “How movements can maintain their radical vision while winning practical reforms,” Waging Nonviolence, April 12, 2022. The original article can be read online here. 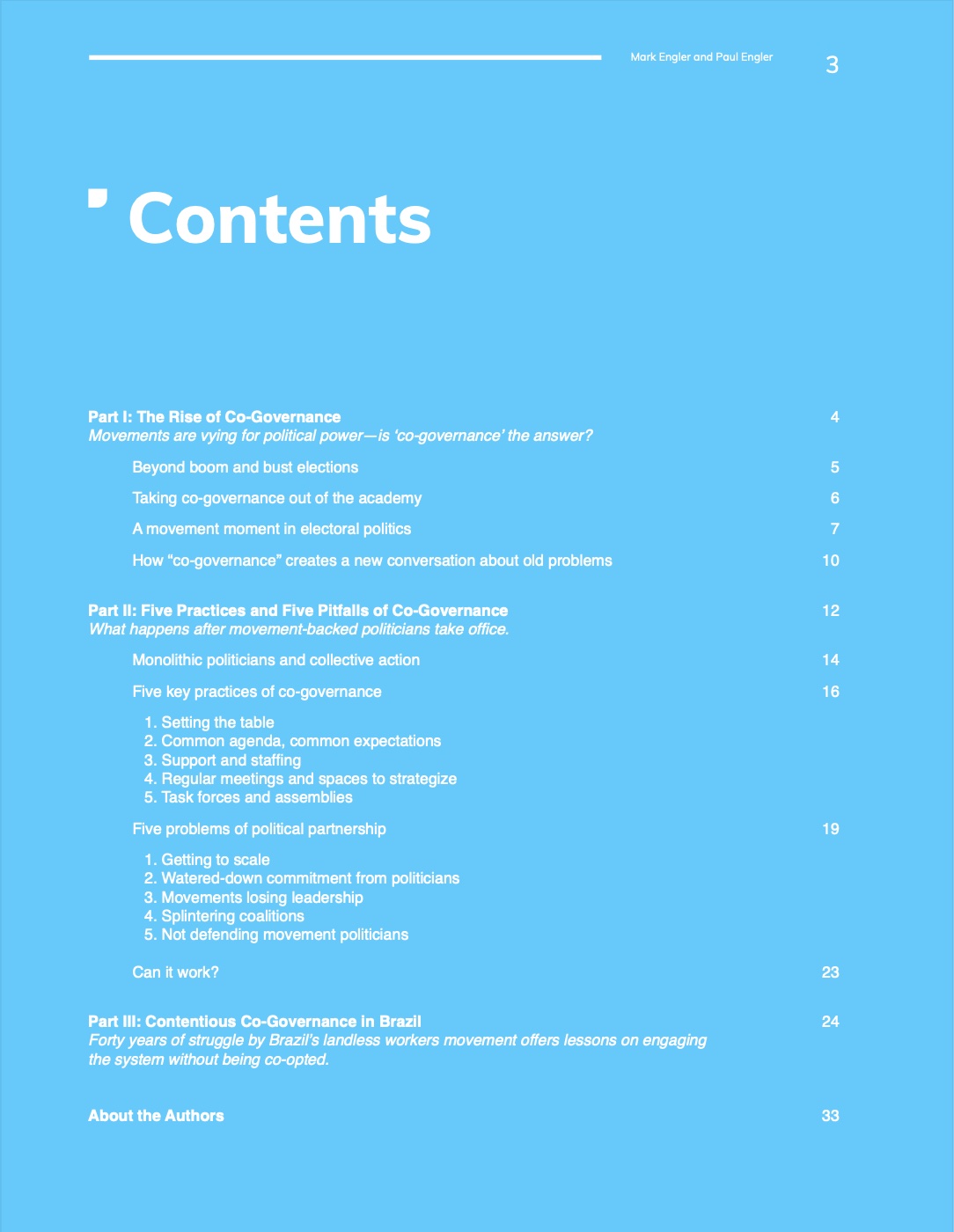 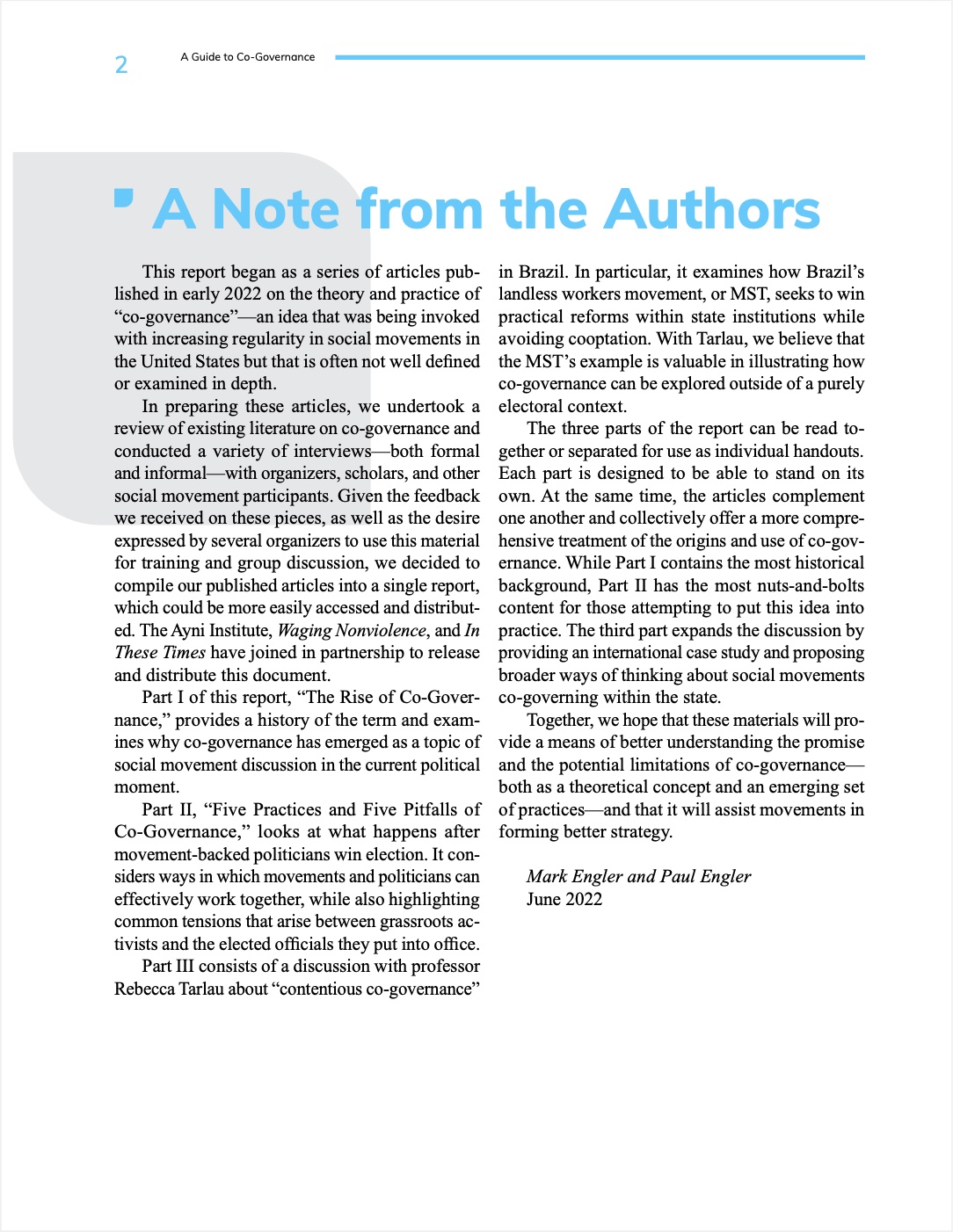 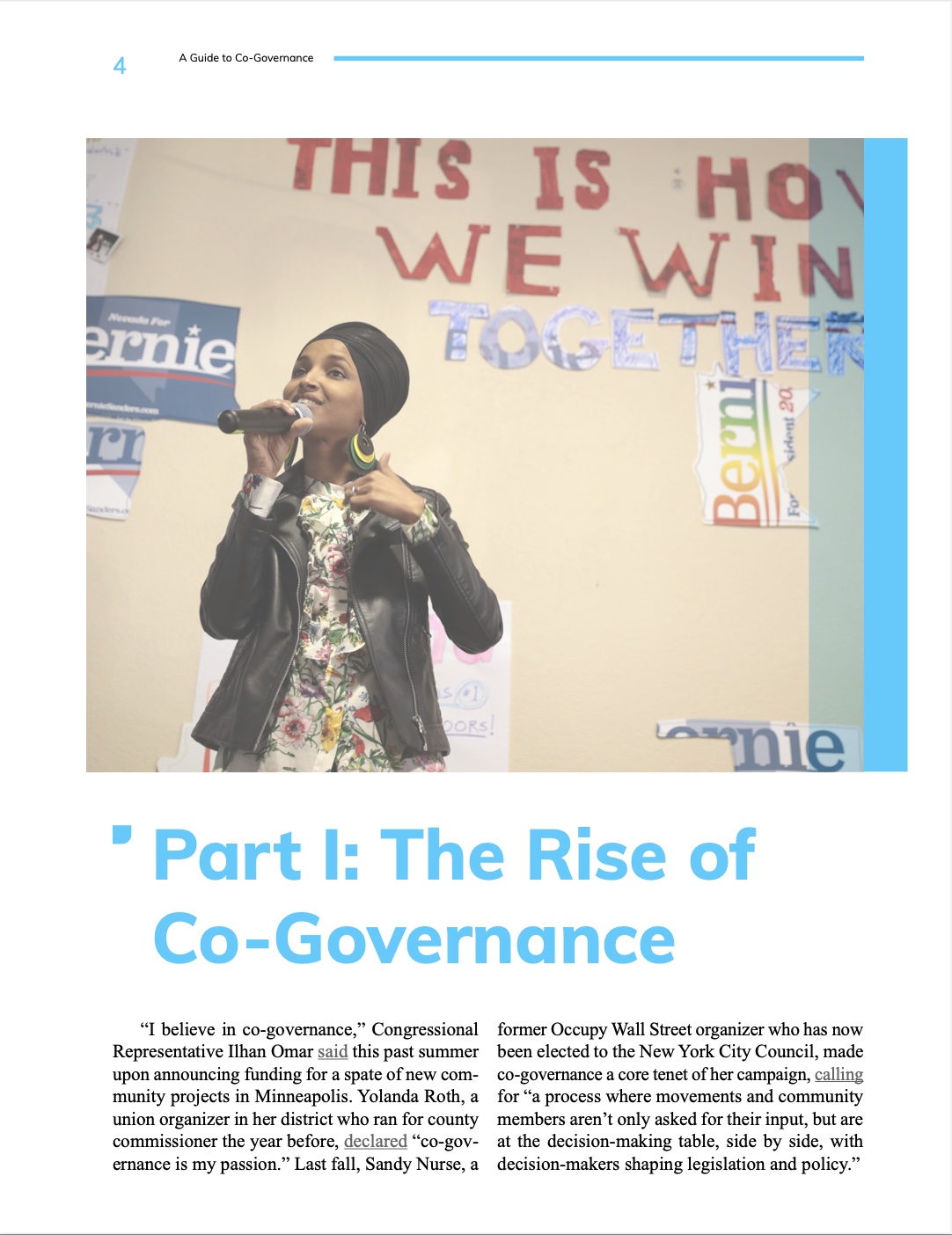 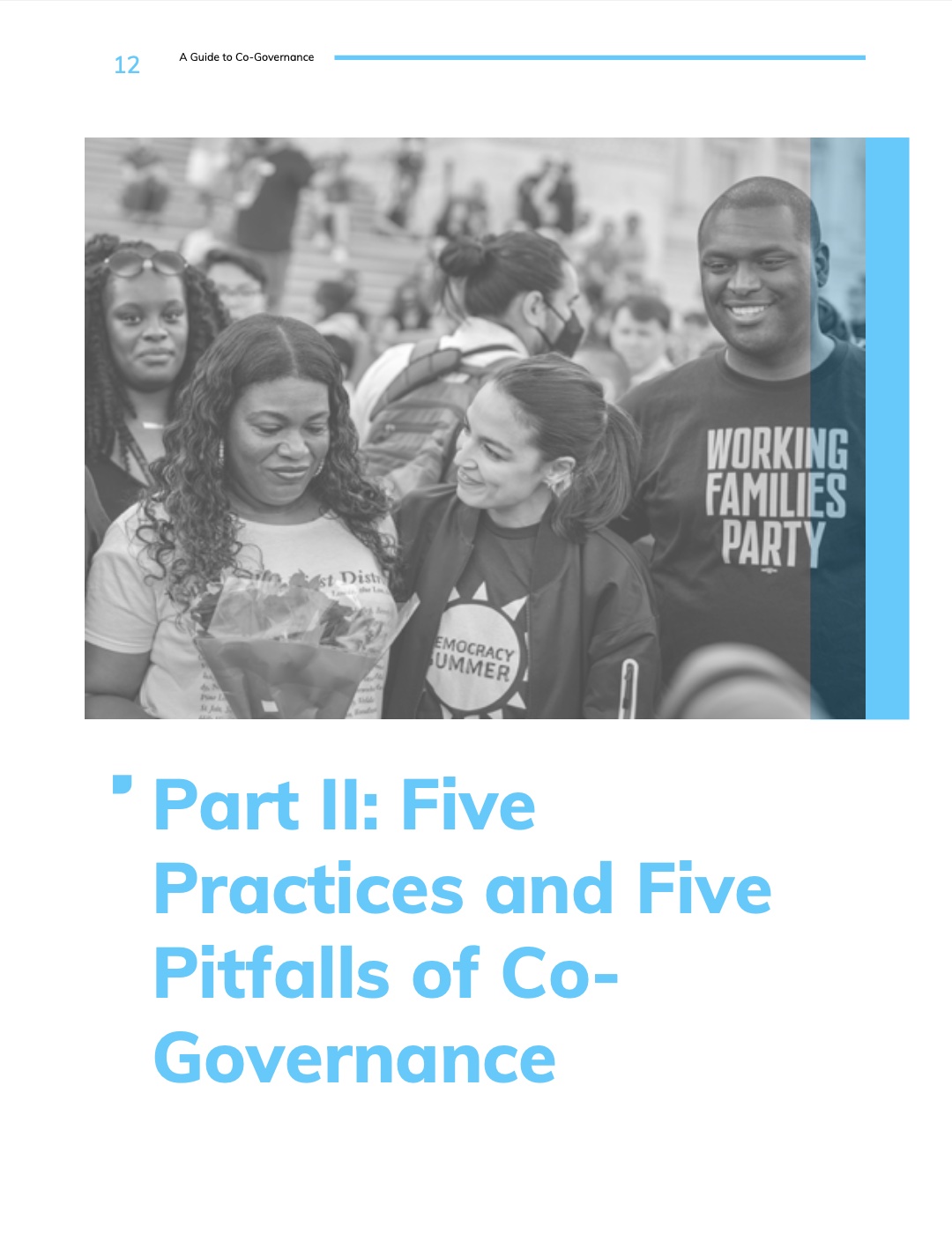 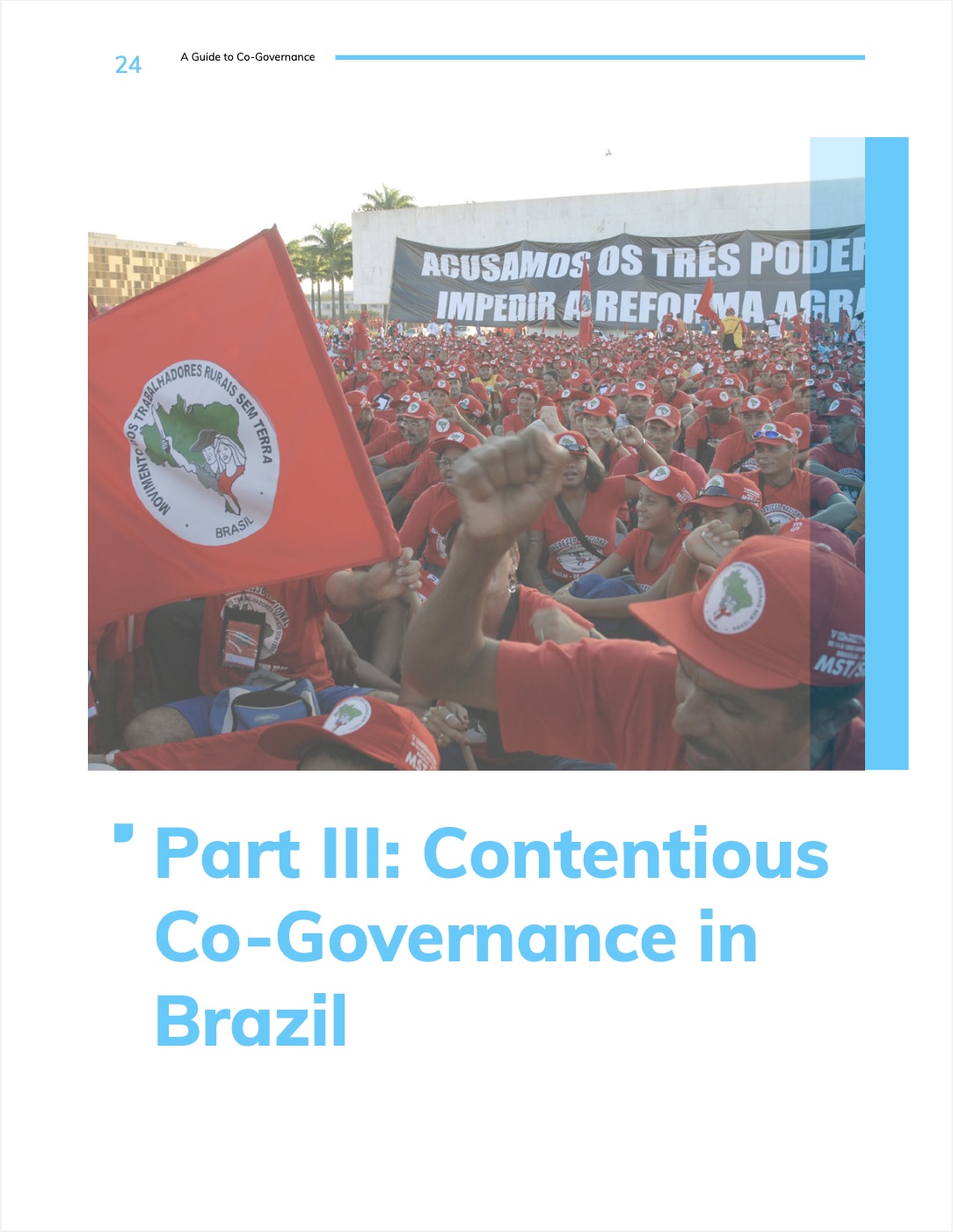 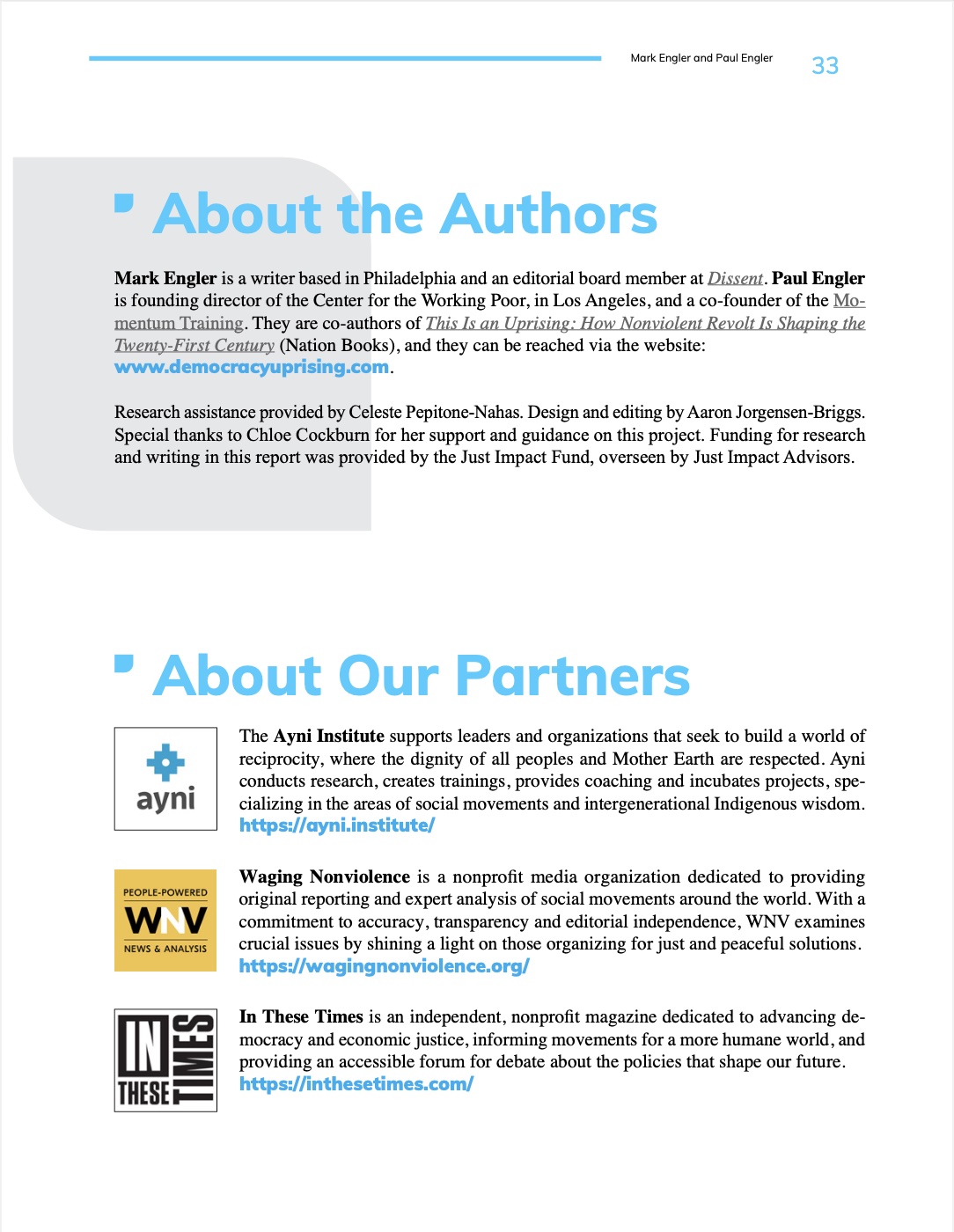 Mark Engler is a writer based in Philadelphia and an editorial board member at Dissent magazine. Paul Engler is founding director of the Center for the Working Poor, in Los Angeles. They are the authors of This Is an Uprising: How Nonviolent Revolt Is Shaping the Twenty-First Century.

Making Our Demands Both Practical and Visionary

How to Take Over a Political Party

What If America Had Six Political Parties?

Movements are vying for political power — is...

How movements can maintain their radical vision while winning...

Should we disrupt the Democratic Party or try...

How to Take Over a Political Party

Making Our Demands Both Practical and Visionary

André Gorz and the Path Between Reform and...

Frances Fox Piven on Polarization as a Tool...